Guest Blog: Public investments in a green recovery from COVID-19: What steps can Canada take?

In a world reeling from the COVID-19 impact on health and economy, smart public stimulus is a powerful tool to both avoid the more searing effects of recession and effect a structural change towards a low-carbon economy. 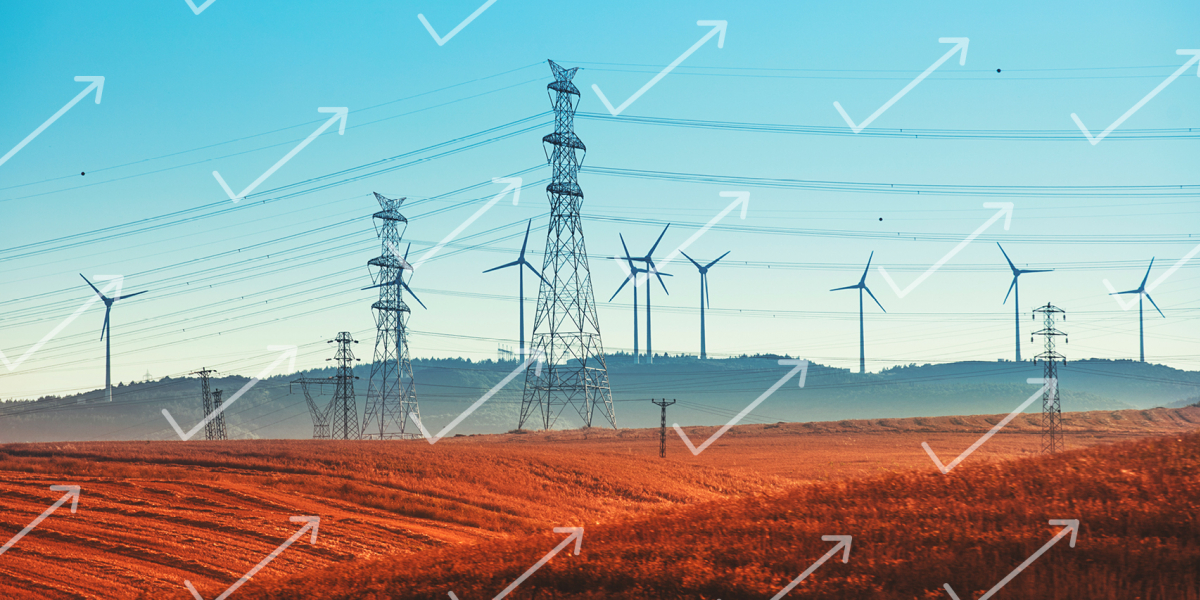 As governments gear up to implement an economic recovery from COVID-19, the demand for a public stimulus that is also green has greatly risen. In June, the International Energy Agency recommended ‘targeted investments’ to the tune of USD 1 trillion globally for each of the next three years in key green sectors to render the recovery a sustainable one. And in Canada, a green growth strategy is being discussed with the aim of linking digital technology via smart infrastructure, similar to the ‘twin pillars’ of digital and green approaches in the European Union’s NextGeneration EU package, the European Green Deal, and the bloc’s new Industrial Strategy.

However, the targeting of green stimulus has to be implemented carefully. Our research shows that direct public investments in green projects are one of the most effective ways to mobilize additional private co-investments, with investments in green innovation promising some of the largest fiscal multipliers. How is Canada positioned to stimulate its economy via this route? We argue that it is well placed to use directed public investment for a smart stimulus - based on its experience with a surge in public investment after the Great Recession; and building on the institutions it set up to catalyze high-risk investments into future technologies.

Between 2004 and 2017, we found that, on average, 83% of funds for Canadian utility-scale renewable electricity generation (excluding large hydro) and biofuel plants came from privately controlled entities, mainly strategic investors (such as energy utilities). Public funds financed the remaining 17%. One can identify three distinct phases of investment in this period – see Figure 1. During the first phase (2004-2009), overall investment grew, starting from a low initial level. Public sources accounted for just 16% of these investments. The Great Recession caused a dip. The second phase comprises the aftermath of the Great Recession (2010-2014), with very high overall investment levels, and public financing accounting for 24% of all new investments. The last phase (2015-2017), saw a drop back to pre-crisis levels, and the public share shrank to its lowest level, just 9%.

Figure 1: Annual investments into utility-scale renewable energy by actor category stacked on each other. 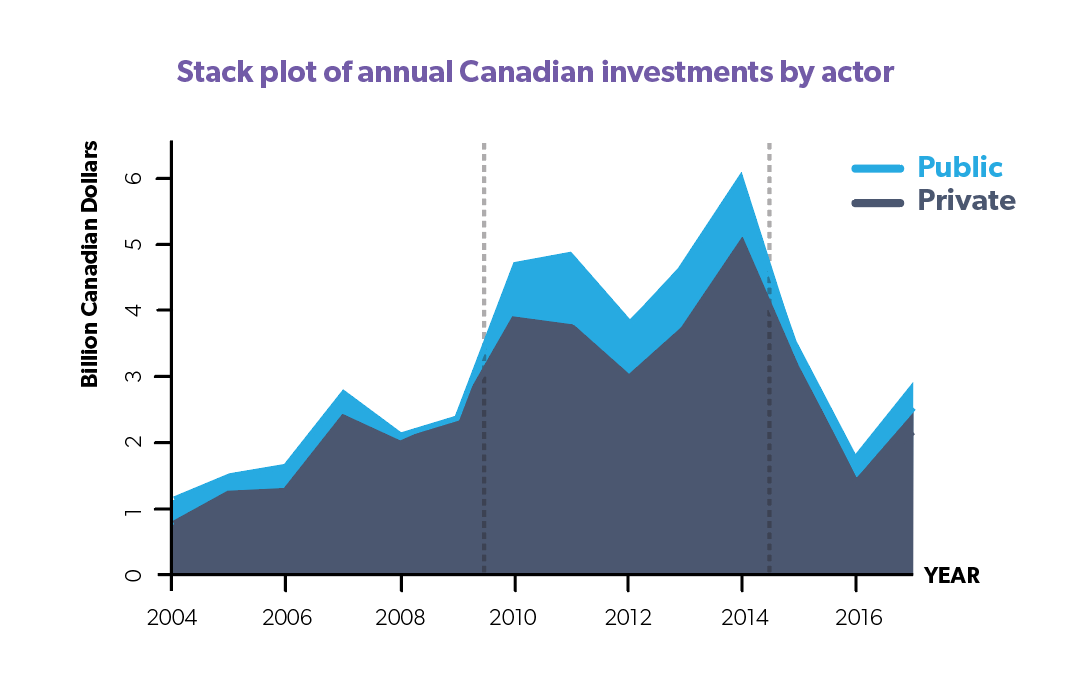 The data show that in the immediate aftermath of a deep and sustained economic recession, there was a surge in public investment. Moreover, it is evident that these public investments coincided with much higher levels of private investments. While this brief analysis shows correlation, not causation, our current research explores the effect of public (co-)investments in more detail. This simple correlation does show however that Canadian state-controlled investors can raise their investment levels if they are willing to do so, and could do so again as part of a stimulus in response to the current crisis.

Besides simply mobilising private co-investments, public investments also have the capacity to set market-shaping directions for structural change, by leading on high-risk demonstration investments that are too uncertain, long-term, and capital-intensive for most private investors to take up on their own or at all. Across most of the time period covered by our dataset, Canadian public entities have had a low investment risk profile, very similar to that of private investors. The exception to this is in 2008 and 2009, just before the surge in public investments (see Figure 2 below). This suggests that after the Great Recession, Canadian public investment tended to reinforce the technology innovation path already trodden, instead of attempting to upgrade to more advanced, but higher risk, investments. (In the energy supply sector at the time these included technologies such as offshore wind, second-generation biofuels and marine energy).

What this means for current recovery efforts in Canada

But Canada does have the capacity to deploy these kind of high-risk investments. This is illustrated by funds such as Sustainable Development Technology Canada (SDTC). In our analysis it is counted as neither public nor private commercial, but as a non-profit, due to its arms-length position from the government, which established the fund. SDTC has consistently maintained a higher risk profile through its direct investment in demonstration projects, as shown in Figure 2. In this recovery, Canada has a chance to double down on these kinds of direction-setting investments.

Figure 2: Index of average risk of investments borne by each actor category as well as Sustainable Development Technology Canada. 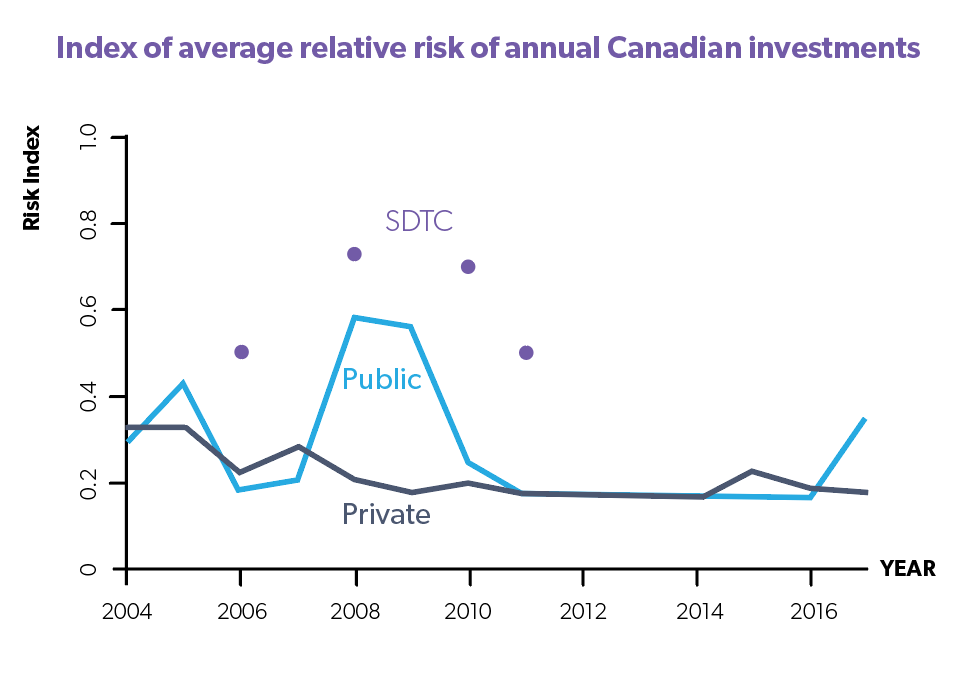 Moreover, direct investments are only one of several levers at the disposal of governments to act as entrepreneurial state innovators and investors-of-first-resort, rather than being forced into a narrow role of only ‘fixing market failures’. The various channels of public financial activity for addressing both the climate emergency and the COVID-19 crisis is something we are exploring through the Priming Public Financial Institutions for Green Innovation (PUFFIN) project.

In a world reeling from the COVID-19 impact on health and economy, smart public stimulus is a powerful tool to both avoid the more searing effects of recession and effect a structural change towards a low-carbon economy. Canada has both the experience and institutions to take advantage of the stimulating effects of public investment, and of directing public funds to high risk investments.

This project was jointly funded by Smart Prosperity Institute at the University of Ottawa, the Institute for Innovation and Public Purpose at University College London and ClimateWorks. 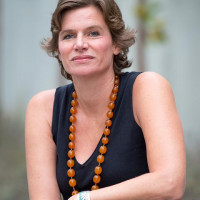 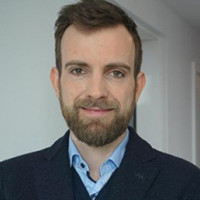 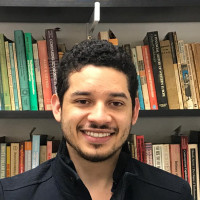 Research Fellow at UCL Institute for Innovation and Public Purpose