A successful GND movement across Canada will need to attract good ideas from across the political spectrum, acknowledge ambitious political action from wherever it emerges, push for further momentum on top of these wins and hold politicians accountable for inaction. 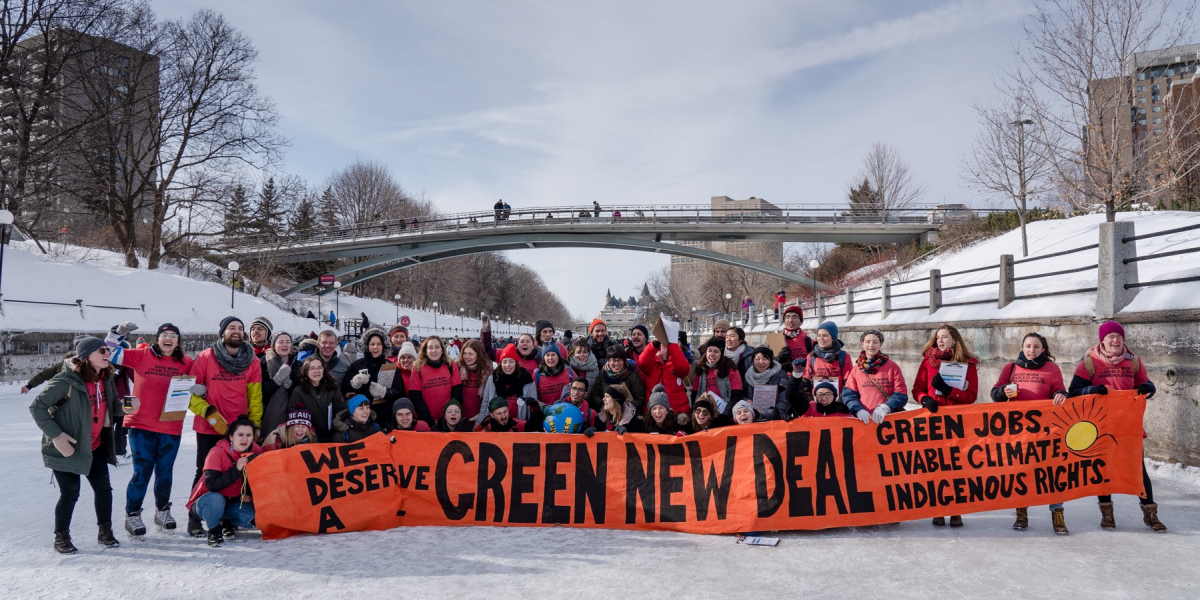 For those who have long struggled to place climate change at the top of the societal agenda, the sudden and astronomical rise of the Green New Deal (GND) concept south of the border has been nothing short of extraordinary.

Mainstream coverage has notably increased, in part because it provides a digestible entry point for an immense and difficult issue. The youth-led nature of the movement and uncompromising messaging – both from high-profile figures like congresswoman Alexandria Ocasio-Cortez and grassroots groups like the Sunrise Movement – has also injected a fresh sense of determination into a debate that has at times felt bogged down.

As Smart Prosperity Leaders Rick Smith and Ken Neumann rightfully pointed out in a Toronto Star op-ed last week, Canadians should both be looking to harness this momentum in favour of climate action, while developing our own bespoke Made-in-Canada approach. The GND has sparked a fierce and important debate about the best climate path forward (more on that below), but its ultimate power and utility is in capturing the sort of solution scale necessary to address the short timeline and massive scope of the problem at hand.

So it was heartening last week to see the launch of the non-partisan Pact for the Green New Deal, “a [Canadian] coalition of workers, artists, Indigenous leaders, scientists, youth and people directly impacted by climate catastrophe” representing more than 60 organizations and 50 prominent Canadians.

Drawing inspiration from both the GND down south and Quebec’s Le Pacte pour la Transition, the Toronto Star summarizes it as having four major pillars: “That it apply science in meeting the scale and urgency of the climate crisis; that it focus on job creation and ensure workers in oil-and-gas sectors receive retraining; that it ensure the transition is socially just and doesn’t hurt those at the bottom of the economic ladder; and that it respects Indigenous rights.”

As Quebec’s Le Pacte has demonstrated thus far, assembling an inclusive grassroots movement has the potential to mobilize new citizens around action and begin to exert substantial pressure on politicians and the private sector in favour of greater action. Most promisingly, the Canada-wide Pact is launching a set of townhalls and other forums in the coming months to begin developing a shared vision of what a GND for Canada would look like.

Now is the time to bring our best ideas to the table.

Importantly, the Pact was not the only major bit of environmental policy action last week. 14 major Canadian environmental organizations issued a joint set of 20 platform recommendations for major parties in the upcoming 2019 election, pushing for further action on climate change, biodiversity and nature, healthy communities and Indigenous rights. Critically, this document contains numerous references to building off of existing momentum from several strong policies implemented by the federal government over the past several years (such as carbon pricing, the coal phaseout, energy efficiency and others).

Author and expert on the global energy transition Chris Turner similarly argued in a series of tweets that any successful Canadian GND would be wise to build off of recent federal policy advances in these areas. “I’d hate to make assumptions, but my guess is if Alexandria Ocasio-Cortez was a lawmaker in a country with a carbon price and an existing national coal phaseout in place, she might endorse defending those things,” he wrote. A successful GND movement across Canada will need to attract good ideas from across the political spectrum, acknowledge ambitious political action from wherever it emerges, push for further momentum on top of these wins and hold politicians accountable for inaction.

The GND movement in the United States has been criticized for dismissing (at times) large swaths of policy ideas for ideological reasons. Most concerning was when 626 U.S. environmental groups issued an open letter laying out their vision for a GND, which rejected any policy that “promotes corporate schemes that place profits over community burdens and benefits, including market-based mechanisms and technology options such as carbon and emissions trading and offsets, carbon capture and storage, nuclear power, waste-to-energy and biomass energy.”

Many of these so easily dismissed approaches, if designed right, can benefit communities and form a key part of the solutions toolkit as we consider how to decarbonize our economy in the fastest manner possible. It’s heartening to see the Canadian Pact avoiding such purity pitfalls thus far, and instead focusing on the need for this low-carbon transition to be as equitable as possible. As recent research conducted by Smart Prosperity for Canada’s Building Trades Union shows, an additional 19,000 jobs in construction would be created due to higher carbon prices and another 20,500 net new jobs would be created in other sectors of the economy by 2025.

Early polling on a Made-in-Canada GND is tentatively positive, with 61 per cent of respondents in an Abacus Poll last month expressing at least some support for such an idea. But as recent political skirmishes around carbon pricing have shown, the greatest vulnerability to taking strong action around climate change is the perception of negative economic impacts on households.

Max Fawcett and others have argued that carbon pricing is uniquely vulnerable to these sorts of pocketbook arguments, but early opposition to the GND in the U.S. has similarly focused in ginning up (wildly inaccurate) cost estimates and claims of impact on lifestyle such as banning all air travel.

As Canadians begin a national dialogue of what our GND might look like, we need to ensure that it contains a winning economic message. Building coalitions in a big, open tent that encompasses a range of experiences and perspectives is a good first step.