Up, Down, and Forward: New numbers reflect the increasingly compelling economic case for greening the economy

The economic case for the transition to a green economy is becoming more and more compelling with the release of new figures on the rising cost of inaction on climate change, and falling prices for renewable power generation. 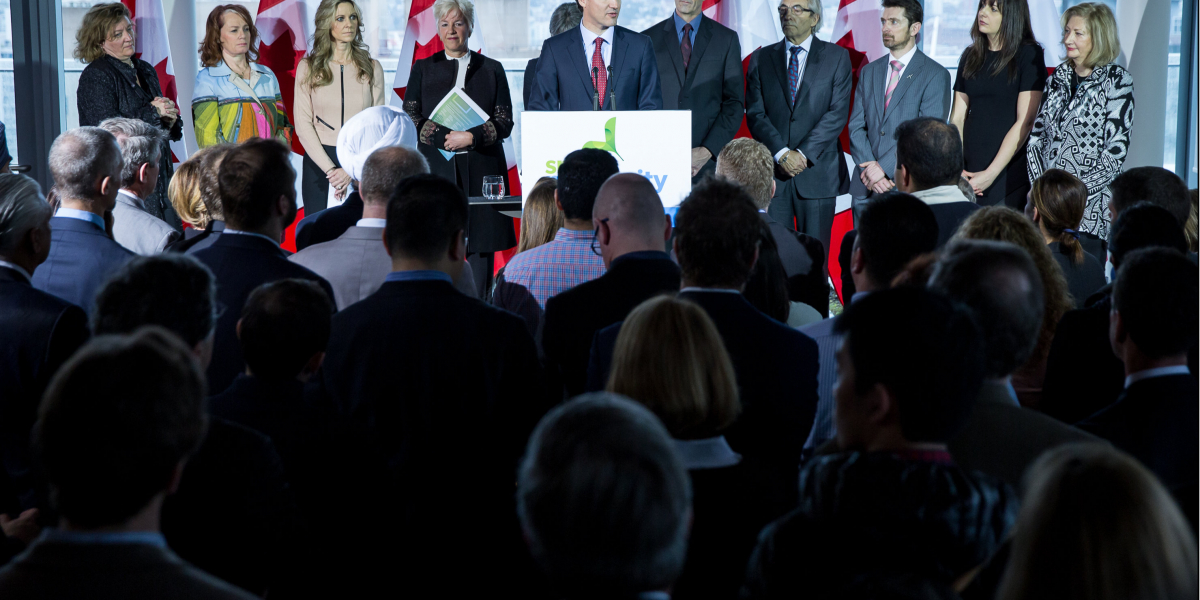 The path to a green economy is far from linear. As better information and new technology become available all the time, some price signals rise and others fall – influencing policy and investment decisions, as well as consumer behaviour. The economic case for the transition to a green economy is becoming more and more compelling with the release of new figures on the rising cost of inaction on climate change, and falling prices for renewable power generation.

The Government of Canada has increased its valuation of the social cost of carbon (SCC) by approximately 30%. The SCC is a monetary measure of the damage expected worldwide from the emission of each additional tonne of carbon dioxide (CO2) or conversely, the monetary benefit of avoiding these emissions. Based on technical improvements in modeling, the SCC estimate for 2016 is now $40/tonne on average for 2016 and rising to nearly $55/tonne by 2030.

The SCC is used by government departments and agencies to account for the effects of climate change in the mandatory cost-benefit analysis (CBA) of regulatory proposals. The economic impacts accounted for range from human health impacts, to changes in agricultural productivity, to increased costs of air conditioning. The SCC is calculated by sophisticated models, which have recently been improved to better represent sea-level dynamics, land-loss potential, and damage functions constrained by GDP among others, leading to the increase.

While some argue the true SCC is closer to US$220/tonne, the argument no longer revolves around whether carbon emissions have a social cost, but exactly how much this cost is.

As the technical understanding and wider public recognition of the far-reaching social and economic impacts of GHG emissions are better incorporated into official policy analysis, decision makers will be better equipped to recognize these impacts and make informed policy decisions, potentially shifting CBA results in favour of low-carbon policies and accelerating the transition toward a green economy.

Meanwhile, the price of renewable power generation in Ontario has dropped to record lows.

The Province’s Independent Electricity System Operator (IESO) has announced the 16 contract offers ensuing from its first competitive bidding process for clean renewable energy capacity. While the Feed-in Tariff (FIT) remains in place for small-scale renewable projects, this competitive call, for projects larger than 500 kW, has clearly demonstrated how technological advances and economies of scale are slashing the costs of renewable power generation, making it increasingly competitive in the energy market.

This marks the first time that a utility-scale solar project has been contracted at a price lower than the retail rate for electricity. One of the winning bids will generate 40MW at a new solar PV park where the former Nanticoke coal-fired generating station used to operate, before closing in 2013 as part of Ontario’s coal phase-out. Despite representing only 1% of the capacity of the once-largest coal plant in North America, the symbolism of the transformation is unmistakable for the wider transition underway in the Canadian economy.

These indicators reinforce the growing political momentum to build a sustainable Canadian economy. A wide constituency is stepping up to augment this momentum, as evidenced by major announcements in March such as the federal-provincial Vancouver Declaration on Clean Growth and Climate Change, the US-Canada joint statement on climate, energy, and arctic leadership, and by the broad base of civil society leaders behind the recent launch of the Smart Prosperity initiative.

As our awareness of the costs of GHG emissions continue to grow, and Canadian and global experts continue to innovate and scale-up clean technologies and solutions to environmental challenges, the speed of the transition is only going to increase – and before long the green economy will become a reality in Canada.