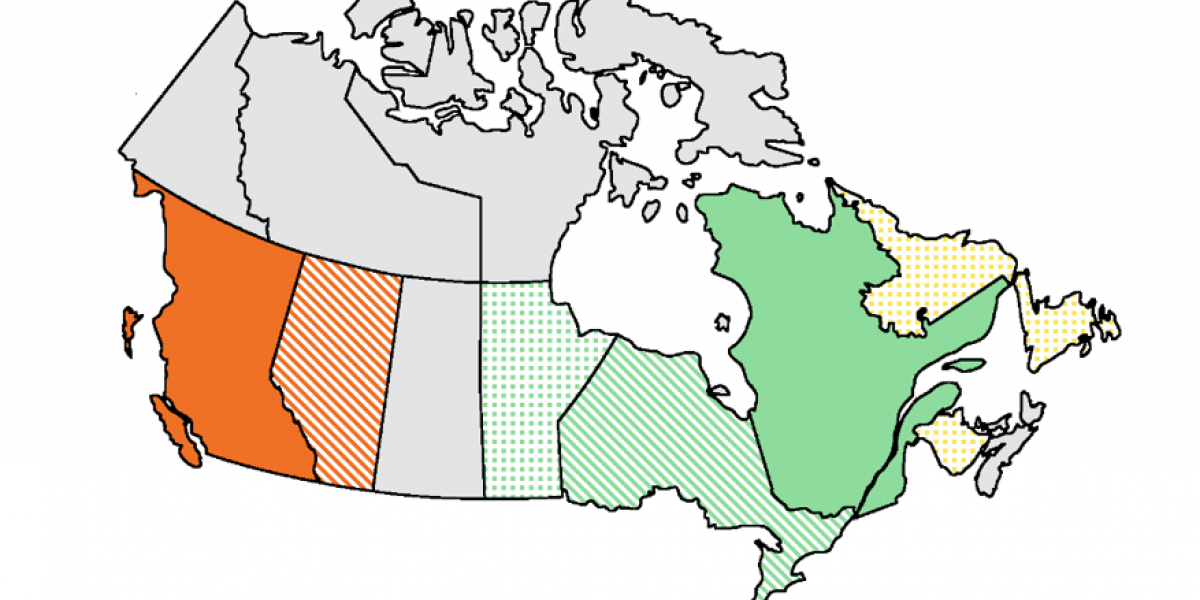 At Sustainable Prosperity, we think carbon pricing is a necessary (but not sufficient) policy to transition to a low-carbon economy. With First Ministers set to meet and discuss climate action and carbon federalism next week, here’s our handy guide to the current state of carbon pricing in Canada.

While all provinces have various climate change programs and policies in place, this map focuses on highlighting explicit carbon pricing regimes.

British Columbia: British Columbia implemented a revenue neutral carbon tax in 2008. The tax, which applies to almost all fossil fuels, was first introduced at a rate of $10 per tonne of CO2 and has increased annually until reaching its current level of $30 per tonne.

Under the current Specified Gas Emitters Regulation (SGER), emitters are required to reduce their emission intensity by 15% annually (relative to a stated benchmark).This current policy also allows other forms of compliance including trading permits with other regulated emitters, purchasing Alberta-based carbon offset credits, or contributing to a technology fund at a cost of $15 per tonne of CO2.

Ontario: In 2015 Ontario announced the introduction of a cap and trade program that will be linked to Quebec’s and California’s existing schemes. Consultation on the cap-and-trade rules, regulations and covered sectors are ongoing and will be completed by the spring of 2016, and the first auction is expected to take place in the first quarter of 2017.

Manitoba: During the Paris climate conference in 2015, Manitoba announced that it will join Ontario and Quebec by introducing a cap-and-trade system to cover 20 large emitters in the province. A timeline for implementation has yet to be announced.

Quebec: In 2013 Quebec became the first Canadian province to establish a cap-and-trade system. This program sets a limit (or cap) on emissions from regulated sectors, while permitting regulated facilities to trade emission allowances. For its upcoming auction, the reserve price per allowance (equivalent to 1 tonne of carbon) is set at $12.82 (CAD). As of 2014, this cap-and-trade system is linked to California’s system under the Western Climate Initiative.

New Brunswick: Premier Gallant announced his government is evaluating different climate change policy options, including a carbon tax. He indicated that if a carbon tax were to be implemented, it would be revenue neutral. A note on the